Their nest is a slight depression in the sand, generally away from beach vegetation.  Their nests are very hard to find since the patterns on the eggs resemble sand and stones.  The adults will silently leave their nest and eggs when beach users approach too closely, so it is easy to inadvertently disturb these birds.  Repeated or prolonged disturbance can lead to nest abandonment.

There are two major reasons for the observed population increases since 1986.  One management tool we use is putting up fencing around nests to keep predators (primarily American crows, striped skunks and gulls) away while still allowing the plovers to freely come and go.  These are called predator exclosures.  A second management tool we use is symbolic fencing - rope strung between posts - to keep beach users a safe distance from the nests.

Piping plovers leave the Vineyard in August or September to spend their winters along the U. S. Atlantic and Gulf Coasts from the Carolinas to Florida and Texas. 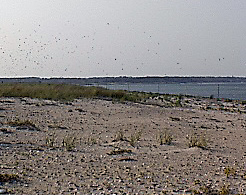 This species nests in colonies ranging from 5 pairs up to the large colony of 520 breeding pairs pictured at right from Joseph Sylvia State Beach in 2002.  When nesting they are quite brazen, and will divebomb anyone who ventures to close to the colony.

Least tern colonies are not necessarily in the same place year after year.  Each of the County managed beaches (Norton Point Beach, Eastville Point Beach and Joseph Sylvia State Beach) has good nesting habitat even though it is not occupied every year.  Based on our observations, a colony site is more likely to become abandoned if predators are active within the colony.  For example, the nests of the 520 breeding pairs of terns on State Beach in 2002 were wiped out by great black-backed gulls and skunks (within one week of taking the above photo).  This site, in the middle of the Oak Bluffs side of the beach, was not used in either 2003 or 2004.

Restricted Area: YOU CAN HELP PROTECT THESE SPECIES

These rare birds, their nests and eggs are protected under Massachusetts and Federal laws. Persons may be arrested and fined for killing, harassing, or in any way disturbing these nesting birds.

This large (crow size) distinctive species is popular with just about everyone.  They are not listed by either the State or Federal governments.

The photograph on the right was taken on Norton Point Beach in 2004.  An adult is on the right (with its bright red beak) and a two month old chick is on the left (with a black beak that is beginning to turn red at its base).
The first record of oystercatchers nesting in Massachusetts is from Martha's Vineyard in 1968.  Since then they have spread across the Island and across the state, with an estimated 40 pairs on the Island and 184 breeding pairs in Massachusetts in 2003.  They have also spread northward into Maine and Canada.
Oystercatchers benefit from the protection of plovers and terns, but note that their range expansion began well before the current protection efforts were initiated in 1986.
HERE IS A SUMMARY REPORT FOR THESE THREE SPECIES NESTING ON COUNTY BEACHES IN THE 2004 NESTING SEASON
Helpful Links: